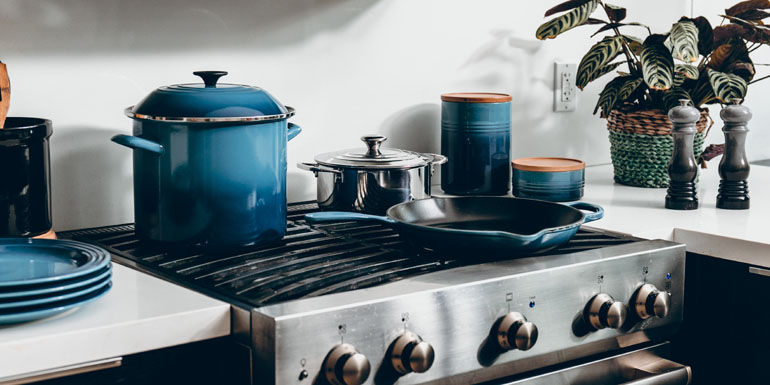 Having a wok and a dutch oven in your cooking arsenal can give you great versatility. Unfortunately, many of us have just one of them. Or maybe you took a renewed interest in cooking and are confused about which one you should get; we covered you in this wok vs. dutch oven guide. We will be discussing what makes these two excellent cookware different in size, build, price, and most importantly, how similar or dissimilar these two are when it comes to cooking different types of food like stir-frying or braising!

A dutch oven is a heavy, thick-walled pot with a tight-fitting lid that helps to trap heat and moisture. Dutch ovens are usually made of cast iron or enameled cast iron.

On the other hand, a wok is a shallow, round-bottomed pan with a large cooking surface area that allows for quick and even cooking. On the other hand, Woks are usually made from carbon steel or cast iron. They’re lighter than dutch ovens and heat up more evenly. It makes it ideal for stir-frying and other quick-cooking methods.

So, If you want to slow-cook a dish, then a dutch oven is a great option. If you’re looking to cook a dish quickly, a wok is a better option.

Let’s find out which cooking technique of dutch oven cooking can be replicated with a wok and which ones you can not.

If you’re looking for an easy, one-pot meal, stir fry is great.

But can you use the dutch oven like a wok to make delicious stir-fried vegetables or meat?

Yes, you can stir-fry in a dutch oven if you don’t have a wok.

But does stir-frying in a Dutch oven damage it?

It depends on which material your dutch oven is made with. If it is an enamel-coated dutch oven, you should put it on such high heat. However, if it’s made with cast iron, then it’s excellent for stir Frying.

Braising is a cooking method that involves cooking food in a small amount of liquid over low heat. This method is often used for tougher cuts of meat that need to be simmered to become tender. A dutch oven is an excellent way of cooking juicy and tender braised meats.

But can you do braising in a wok?

Contrary to popular belief, you can braise on a wok. Woks are great for braising because of their shape. The sloped sides allow you to add and remove ingredients easily, and the large surface area ensures that everything cooks evenly. Plus, the concave shape helps to concentrate the flavors of the dish.

You can easily bake bread in a Dutch oven, and it will come out nice and crusty on the outside and soft on the inside. A Dutch oven is the best way to make some homemade soft loaves to enjoy with your family!

This may come as a surprise to some, but a wok is an excellent tool for baking. It can be used to bake various items, including cakes, cookies, and even bread.

The key to baking in a wok is to make sure that the wok is well-seasoned and coated with oil. This will prevent the baked goods from sticking to the wok. It is also important to preheat the wok before adding any ingredients. You will want to add the better to the wok for cakes and cookies and then bake it in a preheated oven. For bread, you will need to add the dough to the wok and then let it rise before baking it in the oven.

Stews are often hearty and filling, making them perfect for colder weather. Dutch ovens are great for making comfort foods like stews and soups.

It is possible to do stewing with a wok, but it is not the ideal way. Stewing is a slow cooking process that uses moist heat to cook food. A wok is designed for high-heat cooking methods like stir-frying. If you use a wok for stewing, the food will likely cook too quickly and not have the same tender, stewed texture. This is why a dutch oven is better than a wok for making stews.

A Dutch oven is also great for roasting meats and vegetables. The enclosed space helps to lock in flavor and juices, resulting in a delicious and moist roast.

Can a wok be used for making a roast like a Dutch oven? The answer is yes! A wok can be a great alternative to a Dutch oven when roasting. The key is to use a wok that is big enough to fit your roast and make sure that the wok is well-seasoned before cooking.

You can even make desserts in a Dutch oven! Just be sure to line the bottom with parchment paper to prevent sticking. There are so many delicious desserts that you can make in a Dutch oven. Like an apple crisp, all you need is some top sliced apples with a mixture of oats, sugar, and butter, then bake it in a dutch oven until golden and bubbly. You can make a peach cobbler or Chocolate chip cookie cake as well.

You might be surprised to learn that you can make desserts in a wok, just like you would in a dutch oven! Although you won’t be able to make as many desserts as you can do with a dutch oven. But you can certainly make some delicious desserts like Wok-fried bananas with chocolate sauce, Stir-fried mangoes with sticky rice or Fried plantains with caramel sauce.

A wok is much smaller and lighter than a Dutch oven when it comes to size. This makes it much easier to maneuver, and it’s also more energy-efficient since it doesn’t take as long to heat up. However, the smaller size also means that a wok can’t accommodate as much food as a Dutch oven.

So, if you’re cooking for a large group, a Dutch oven is probably a better option. A wok is also much lighter than a Dutch oven when it comes to weight. This makes it easier to carry, and it’s less likely to break if you drop it. However, the lighter weight also means that a wok is more likely to tip over if it’s not properly secured. So, if you’re cooking on a stovetop, be sure to use a wok ring to keep it in place.

A wok is a way to go if you’re on a budget. However, if you’re looking for something a little nicer, an enameled dutch oven is a great option. Here’s a quick breakdown of the average prices of each type of cookware:

Basic cast iron dutch ovens start at around $50. Enameled Dutch ovens range from $100-$300. So, as you can see, there is a significant price difference between woks and dutch ovens.

If you’re looking for a cooking item that is low maintenance and easy to care for, the wok is the better option. But if you’re willing to put in the extra effort to care for a Dutch oven, it can be an excellent option for cooking.

When it comes to maintenance, the wok is the better option. It is easier to clean and doesn’t require as much upkeep. But the biggest downside to using a wok is that it is not dishwasher safe. Works are made of cast iron or carbon steel. These materials are not dishwasher safe.

One of the biggest challenges of cleaning a Dutch oven is that they are difficult to clean. As they are usually made of cast iron or other heavy-duty metal, it can be difficult to scrub them for cleaning.

Whether you want to stir-fry or make roast, you can make it with both wok and dutch oven.

However, a wok is a better option for some specific dishes like stir-frying. A dutch oven is way better for making stew, soups, or baking.